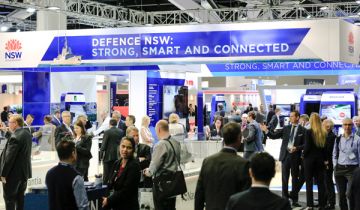 The NSW Government invites defence companies to apply now for a chance to exhibit on its stand at Land Forces 2018, one of Australia’s largest defence expos.

Land Forces will be in Adelaide from 4-6 September 2018 and NSW will have a strong presence promoting our state’s defence industry capabilities.

Held every two years, Land Forces is a chance to showcase some of NSW’s best defence companies and equipment, technology and services available to the armies of Australia and the Indo-Asia-Pacific region.

The Defence NSW team will host the stand for NSW at Land Forces. Participation in shows like this is an essential part of creating the conditions for sustainable, technologically advanced and globally competitive defence industry.

Expressions of interest are open until 5.00 pm on Monday 19 February for NSW defence companies wanting to apply for a chance to exhibit on the government stand.

The last Land Forces held in Adelaide in 2016 attracted 464 exhibitors from 22 countries, 18 international delegations and over 10,450 visitors.

NSW is home to 21 major defence establishments and training areas, more than a quarter of Australia’s Defence personnel and more defence industry skilled workers than any other state.

NSW is also home to the majority of the nation’s leading tertiary and research institutions and the government is investing in the future defence of Australia with initiatives like the Defence Innovation Network.

Visit Land Forces 2018 for the  further information on applying to exhibit on the Defence NSW stand.

For more information on the NSW defence and industry strategy download NSW: Strong, Smart and Connected

Back to top
Page link: https://www.business.nsw.gov.au/defence-nsw/news/defence-news/defence-companies-invited-to-exhibit-on-nsw-stand-at-land-forces-2018