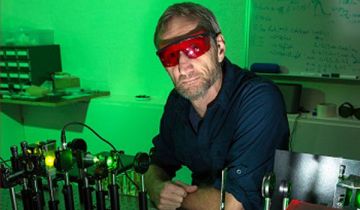 A project to develop a high powered laser to help defend against threats such as drones, missiles or even space junk are among NSW winners of Eureka Prizes.

The Eurekas - dubbed the 'Oscars of Australian science' - are Australia’s premier science awards celebrating scientific breakthroughs from around the country.

NSW picked up a string of awards at the 2017 Australian Museum Eureka Prizes Awards ceremony.

Among them was Macquarie University’s Associate Professor Richard Mildren, who was named winner of the Defence Science and Technology Eureka Prize for Outstanding Science in Safeguarding Australia.

The patented technology has attracted the attention of defence stakeholders worldwide, including funding from US defence agencies.

It is hoped the laser technology can be developed to defend against threats such as drones and missiles or even space junk by being accurate and powerful enough to destroy objects that are a great distance away.

“The award is a terrific recognition, not just for the diamond laser team but also as a tribute to the strong tradition of the high power laser research at Macquarie and MQ Photonics over decades," said Associate Professor Mildren.

“It is also very timely – one of our goals is to reach out to government and industry partners for translating the research to end users. We hope the additional exposure will be a great help for promoting these activities.”

The NSW Government's Defence and Industry Strategy, New South Wales: Strong, Smart and Connected, aims to build the State's defence industry including by building Defence and industry collaboration with universities to enable faster development and commercialisation of technologies.

Other NSW winners of 2017 Eureka Prizes

Back to top
Page link: https://www.business.nsw.gov.au/defence-nsw/news/defence-news/nsw-laser-defence-project-among-eureka-prize-winners