Defence NSW is a dedicated organisation that drives opportunities to collaborate, partner and support the growth of the NSW defence sector. Defence NSW is part of Investment NSW, a NSW Government agency reinforcing the State’s position as the economic engine room of the country.

We cooperate with industry networks in order to promote NSW defence industry. Networks we work with include: 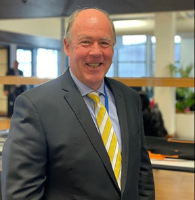 Mike Gallagher is the Director Defence & Aerospace NSW and has been in post since March 2021.  Mike leads a dedicated team in Investment NSW, within the Department of Premier and Cabinet, to execute the NSW Government’s Defence and Industry Strategy - Strong, Smart and Connected and the NSW Space Industry Development Strategy.  These two strategies serve to position NSW as the State most capable of delivering highly complex programs through leveraging  the inherent capacity, capability and innovation within Metro, Regional and Precinct locations.

Mike enjoyed a distinguished career in the Royal Australian Navy (RAN), specialising in Submarines. He undertook a series of appointments in Australia’s Oberon Class submarines before successfully completing the Submarine Command Course and is a graduate of the Royal Navy Staff Course.  Following his exchange with the Royal Navy, during which time he commanded the UK submarine HMS OSIRIS, Mike led the training and development program for the new Collins Class submarines. Concurrently, he was in Command of the second of the class, HMAS FARNCOMB until its delivery in 1997.

Mike has been active in the defence industry for over 22 years.  After retiring from the RAN he has held a number of senior executive roles with Raytheon Australia, CEO of L3 Oceania and Director of Strategy at Northrop Grumman Australia that all serve as a solid foundation to lead the future growth of NSW’s defence space and related industry portfolios.

Air Vice Marshal Kym Osley, AM, CSC was appointed into the role of Defence Advocate on 16 August, 2021.

Kym has more than 44 years’ experience with Defence and Defence Industry, and for the last six years up to 2021 was a senior member of the Canberra Defence and Government practice of PricewaterhouseCoopers (PwC). He brings extensive experience to NSW Defence Advocate role in the Defence and aerospace industry sectors, as well as in strategic planning, long term Defence acquisition planning and complex program management.

During his military career Kym managed and supported large and complex Defence acquisition projects in successive Defence capability development positions over three decades. Kym has previously been the Head of the Australian F-35 program, a $17B aerospace program that has delivered about $2.0B of Australian industry contracts to date.

Kym was Head of Australian Defence Staff in Washington DC in 2008-2010 and was responsible, along with Austrade and DFAT representatives for promoting Australian industry. He performed a similar role for military aerospace in the UK in 1999-2002.

Kym has commanded at all ranks through to two-star, and held unit commands at the flight, squadron, wing, and group levels. He directed the operations of the Coalition air components (including the 425 aircraft and 25,000 airmen serving within the Coalition air components) in the Middle East in 2006/07.  He is a fast jet aviator with experience on Phantom, F-111 and F-18 aircraft and flew on combat operations over East Timor and in the Middle East.

Since 2014, Kym has been an Air Vice-Marshal (two star) in the Active Reserve which has included duties as a senior military adviser to Defence Industry Division within the Department of Defence. In this role, Kym has assisted Defence in developing strategies for enhancing Defence industry exports and in engaging with regional nations.

In recent years, Kym has been a strategic adviser and consultant to Defence on several projects and activities, including developing the Australian Defence Force Design process, called the Defence Capability Assessment Program which the Australian Department of Defence uses to coordinate the progression of about $5Bn of capability programs and initiatives for procurement each year. He also was strategic adviser to Defence for the development of the Force Structure Plan 2020 which will guide the investment of about $270B in Defence spending over the next decade. He was awarded a Defence Industry Service Commendation in 2019 by the Minister for Defence for his work over the period 2016-2019 in strategic acquisition planning for Defence.

Kym has lectured on complex program management at the Australian National University, the Centre for Defence and Strategic Studies and to a Defence-sponsored Masters in Complex Program Management Course.  He has Masters Degrees in Arts and Defence Studies, a BSc (Physics) from Melbourne University, a Graduate Diploma in Military Aviation and is a Graduate of the Harvard Business School (AMP).

In 1997, Kym was awarded the Conspicuous Service Cross for services to Air Force strategic planning and was made a Member of the Order of Australia in 2008 for his services to Air Combat.

Back to top
Page link: https://www.business.nsw.gov.au/defence-nsw/who-we-are