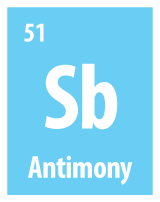 Read about Antimony [2.27 MB] mineralogy and prospectivity in NSW.

The New England district in NSW has been identified as areas of significant antimony deposits and awaits further exploration and development.

The Halls Creek area near Armidale in the New England district is being actively explored by Precious Metal Resources Limited for base metals and has made promising discoveries with potential of high grade, multi-metal field with world-class potential. Antimony is considered to be a secondary target to gold.

The Bielsdown project, owned by Anchor Resources Limited, is located 12 km north of Dorrigo in the New England district. The project includes the Wild Cattle Creek antimony mine, which was discovered in the late 1800s and mined intermittently on a small scale until the most recent mining in the 1970s. The area is still prospective.

The Clarks Gully Project, owned by Hillgrove Mines Pty Ltd, is located near the Hillgrove Mine near Armidale in the New England region of NSW. The company has proposed to recommence mining for gold/antimony at the former Clarks Gully mine by way of a small open-cut pit followed by an underground mine.

Hillgrove Mines Pty Ltd is the operator of mining leases for the Hillgrove mine. The Hillgrove Mine is a world-class producer of gold and antimony. Bracken Resources (the parent company of Hillgrove Mines Pty Ltd) has stated it is primarily interested in it as a gold mine. However, the value of antimony mining to the operation has not been overlooked. Exploration drilling has determined a proven resource of more than six million tonnes at the Hillgrove Project and the company is confident further drilling will substantially increase their known reserves and resources of both gold and antimony. The antimony deposit is the largest in the world outside of China.

Back to top
Page link: https://www.business.nsw.gov.au/industry-sectors/industry-opportunities/mining-and-resources/base-metals/antimony-in-nsw