NSW has Australia’s best apprentice and is home to the best medium-sized Vocational Education and Training employer for 2018 after wins for the state at the 2018 Australian Training Awards.

Snowy Hydro apprentice Michael Edwards took out the top honour of Apprentice of the Year at the recent national awards while Tuggerah-based North Construction and Building was voted Medium Employer of the Year.

Mick, as he prefers to be called, won the Apprentice of the Year Award at the 2018 NSW Training Awards in September which qualified him to represent NSW at the national awards.

He is a dual apprentice and NSW and Australian Training awards recognised his second apprenticeship as an Electrotechnology-Electrician.

Mick is also a qualified mechanic who was working at Snowy Hydro as a Cloud Seeding Technician for 15 years when the company offered him the chance to take up his electrotechnology apprenticeship.

He grabbed the opportunity and was a standout performer at TAFE NSW Riverina where he was fast tracked through his second apprenticeship.

Mick completed a Certificate III in Electrotechnology Electrician, taking out the TAFE NSW Wagga Wagga Campus apprentice of the year in 2017 in the process..

In the final ‘Capstone’ exam for his apprenticeship, Mick achieved 100% in his practical exam and 93% for the knowledge exam. It was the highest mark achieved at Wagga Wagga since the nationally written and validation assessment began.

Mick said while he enjoyed working in the mechanical/electrotechnology industry he had a long term ambition of becoming a VET teacher to help others.

'I mentored young apprentices when I was studying and found it really rewarding so ultimately I’d like to give back to the industry and train apprentices,' he said. 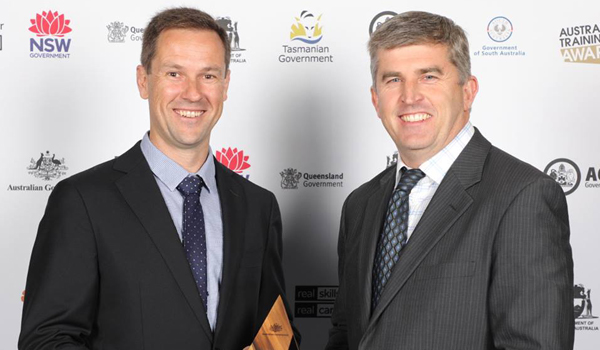 North Construction has been operating for over 30 years on the NSW Central Coast and is one of the largest locally owned and operated construction businesses with 90 workers.

The company has invested heavily in training young construction workers to meet growing future demand for locally based skilled staff. As a result, its workforce team includes 12 apprentice carpenters and 13 building cadets.

'Our apprentice program is very structured and aims to teach apprentices carpentry and leadership skills from their first day on site,' Mr Cornish said.

'We have a dedicated apprentice manager who creates an appropriate learning environment for each apprentice including regular reviews to monitor their progress.

Back to top
Page link: https://www.business.nsw.gov.au/industry-sectors/invest-news/news/nsw-wins-at-australian-training-awards